A nuclear plant asked us to design an alarm console configuration that would fit equally well in two very different rooms. Each console would provide adequate seating for three workstations, but the rooms were relatively small and each had a unique assortment of cabinets and apparatus, some of which was moveable and some not. We approached the project using a blend of Winsted, EDP Contour, Chief, and Tripp-Lite products.

Starting from basic information including room size, number and size of monitors, number of operators, number of CPU’s, and rackmount requirements, we prepared a couple of concept “collages” showing the size and type of console along with associated features using a basic “chassis” of both Winsted and EDP Contour.

As is often the case, finding a way to fit the identical consoles in each very different room was an interesting challenge.

The customer wanted to be able to walk on all sides of the console. Each room had an assortment of fixtures, furniture, and apparatus that also must be accommodated. The customer liked the M-View wall and the basic shape we presented. We took the dimensions of each moveable object and created a Visio stencil we could slide around on our drawings, while also spinning our Winsted and Contour alarm consoles in various directions. We numbered the objects so we would know what object belonged was being placed in what location. 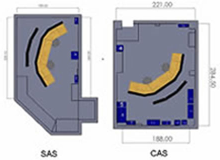 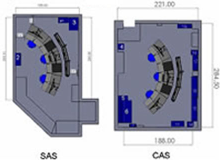 Numerous console configurations were arranged in numerous orientations. I moved my numbered rectangles to work with each orientation. The chosen configuration was Winsted Sight-Line, 42” deep. Rackmount rails were included within console. 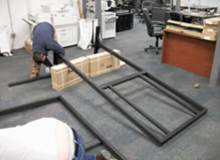 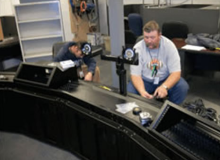 The Winsted Sight-Line consoles were assembled in an unused administrative area, then separated back out into manageable modules for quick moves into the Alarm Room.

Door mounted fans were supplied to cool the CPU’s and rackmounted electronics contained within the Sight-Line cabinetry. My customer calculated the cfm requirement and selected an Orion fan from a chart I provided showing heat dissipation and decibel ratings. 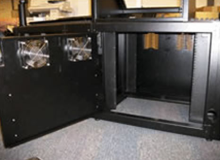 This rear view photo of Winsted Sightline shows the fans mounted two per door and vertical rackmount rails. The photo was taken before we dropped in the shelf in the bottom of the cabinet. The photo on the right shows one of the cable trough lids in and up position.

Page Concepts, Inc. is here to help. If you would like a proposal or to talk about how we might be able to help please give us a call at 888-821-1430 or send us an email.